MoviePass has proven that moviegoers are interested in a subscription service. But as this beleaguered company continues to experiment with its model, Cinemark thinks its rolling offering is the right monthly plan for moviegoers.

The service now has 350,000 members, more than double what it announced just three months ago.

Cinemark (CNK) CEO Mark Zoradi said in an interview with CNNMoney on Wednesday that Movie Club offers a lot of things you can’t get with MoviePass.

His service gives members one ticket per month for $8.99. Tickets are for standard films and do not include 3D or IMAX films.

But Movie Club members can carry over their unused tickets indefinitely. So if you don’t like summer blockbusters and only want to see Oscar contenders in the fall and winter, you can stock up on tickets for the end of the year.

“We’re targeting frequent moviegoers, not ultra moviegoers who go to the theater four to five times a month,” Zoradi said. “Most people go once or twice a month. That’s why we designed the program on a rolling basis so it’s not a use-it-or-lose-it proposition.”

Movie Club also allows members to purchase tickets for non-members for $8.99. And there’s a 20% discount at the concession stand so you can get a great deal on popcorn and Junior Mints.

Zoradi said the issues facing MoviePass and its parent penny stock Helios and Matheson (HMNY) could present an opportunity for Cinemark.

MoviePass shook up the entertainment industry by initially allowing people to go see as many movies as they wanted per month for a flat rate of $9.95. It was great for the movie buffs, but not for the business. This is because MoviePass was buying tickets from movie chains at full price. The model has proven unsustainable: MoviePass now limits customers to three movies per month. 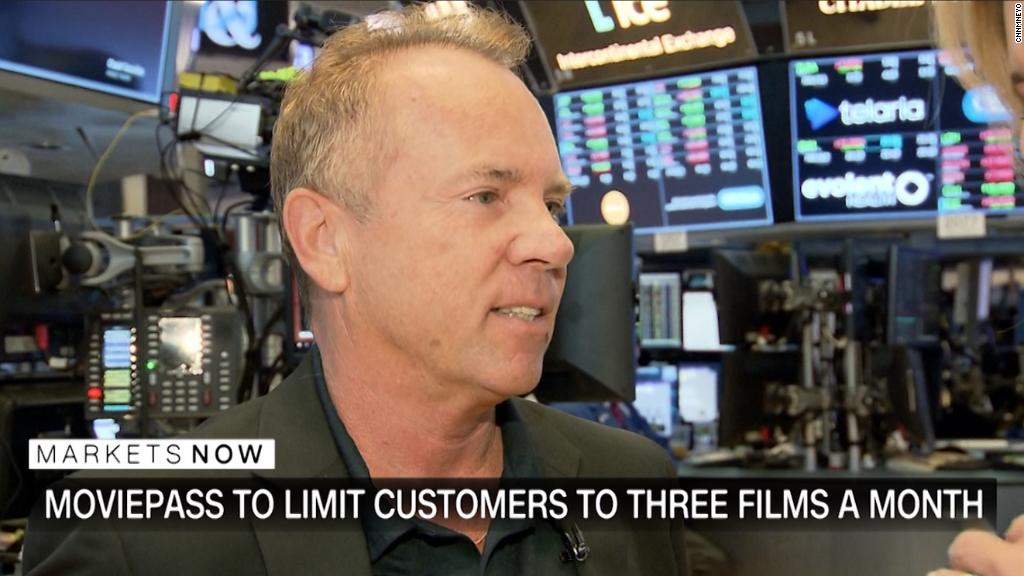 But Cinemark has no plans to change its offerings to make them closer to MoviePass.

“We will never sue people who wanted an unlimited plan,” Zoradi said.

Zoradi expects some MoviePass customers to sign up for Movie Club and expects subscribers to top 500,000 within months.

The company’s main threat comes from rival movie theater owners. Cinemark’s stock is up 5% this year. But that lags the more than 20% jump in AMC shares.

But Zoradi is confident that Cinemark will continue to attract even more moviegoers. The company is spending heavily to renovate many of its theaters.

And the box office trends are encouraging.

Zoradi said he’s especially excited for next year when sequels to “Toy Story,” “Frozen,” “Top Gun,” “Spider-Man,” “It,” “The Lego Movie,” and “How to Train Your Dragon” will be released. the program – not to mention the upcoming “Avengers” and “Star Wars” films.

“We’re looking forward to 2019. I’ve never seen so many key weekends already locked down as studios put their tentpole flags in the ground,” Zoradi said. “Cinema is alive and well.”

In a 2016 interview posted on the OETA website, Wexler said the popcorn was real but tried not to eat it during the show. “Whenever I try to slip it on during the movie, I’m sorry a few minutes later when I’m getting ready to speak on camera,” Wexler said. These tiny little grains have […]

The California Film Institute celebrates cinema in Marin County through acclaimed events such as the Mill Valley Film Festival and the DocLands Documentary Film Festival, the diverse lineup at the Christopher B. Smith Rafael Film Center in San Rafael and the screening schedule, CFI Education courses and workshops. CFI is now welcoming a new national […]

TORONTO — Cineplex Inc. hopes moviegoers who missed the big screen will join the club. Canada’s largest movie theater operator announced plans to launch a monthly subscription program on Wednesday that offers a small selection of perks and discounts at the multiplex. CineClub will cost $9.99 a month – less than the price of a […]